On one of the walls in Kate Ceberano’s Melbourne home hangs a portrait of herself as a 17-year-old. Painted by renowned Australian artist David Bromley, it has pride of place in her living room, acting as daily reminder of how far she has come over the decades in truly accepting herself and her image.

“There was so much in my life and career that I couldn’t ever tolerate to watch,” she states, as she reflects on her remarkable 35-year plus career in Australian show business.

“I hated seeing images of myself, I hated hearing myself and I never listened to my back catalogue. I was plagued with self-criticism.”

For a woman whose fashion-forward image has been intertwined with her musical artistry since the early 80s, when she first came to prominence as the lead singer of I’m Talking, it’s an interesting remark.  Pictures of the then 17-year-old Ceberano show her dressed head-to-toe in the latest couture; wide brimmed hats, asymmetric shoulder pads and lashings of red lipstick highlighting her trademark smile.  She concedes the 1980s were a great time for dressing up and always chose Melbourne designers when it came to outfit choices:  Bettina Liano, Christopher Graf and Martin Grant.  “You could experiment without any kind of fear or any kind of consequence,” she says of the outrageous decade.

In fact, it was a Christopher Graf creation that Ceberano chose to wear for the Rocking with the Royals concert in 1985, where I’m Talking performed for Princess Diana and Prince Charles at the Melbourne Concert Hall (now Hamer Hall). Graf designed a white linen fitted blazer with gold buttons and a matching wide brimmed hat trimmed with fake fur. Also on the regal bill that evening were INXS, The Models and Kids in the Kitchen.

“I remember telling Prince Charles I wore the hat because it reminded me of his mother and he loved that,” she laughs.

Ceberano explains that since that concert, the hat and blazer have been hiding in storage but have recently been found after a request from the Australian Music Vault to loan them for their next display. “I still have all my stage clothes and an entire garage full of archives. My daughter has been playing dress ups in all of them since she could walk.”

Kate Ceberano’s musical odyssey started at the age of 15 when she was living out of home and making her way around the clubs of Melbourne as a dancer. One of her first musical projects, The Hoagy Cats, with pianist Stephen Hague came about from the pair’s mutual love of 1930s jazz.

“The night I met Stephen he was wearing an op-shop suit and looked like Danny Kaye. I was a massive fan of Danny Kaye at the time and I just started singing with him. We decided we should form a band so we called ourselves The Hoagy Cats after singer and actor Hoagy Carmichael.”

“We opened up for Vince Jones at Hamer Hall when I was 15. I remember making a beautiful herringbone skirt which I cut up and re-stitched by hand.”

In fact, Ceberano’s passion for fashion is never far away from her conversation as she recounts musical memories from her teenage years. Prior to The Hoagy Cats, there was a short-lived band called Expozay. “A cross pollination between pop and punk and my love for Vivienne Westwood and Malcolm McLaren,” she gushes.

In 1983, Ceberano joined former Essendon Airport members Robert Goodge, Ian Cox and Barbara Hogarth along with second vocalist Zan Abeyratne and drummer Cameron Newman to form commercial funk group I’m Talking. Essendon Airport had been a cult funk band on the Melbourne circuit who wanted to move beyond their instrumental repertoire towards a more adult oriented commercial sound. With Ceberano as their lead singer, they achieved this feat quickly. I’m Talking were soon recognized as pioneers of a sophisticated dance sound and were an anomaly amongst their peers, performing in the rock-dominant beer barns and pubs of Australia with two frontwomen and female bass player at their helm. 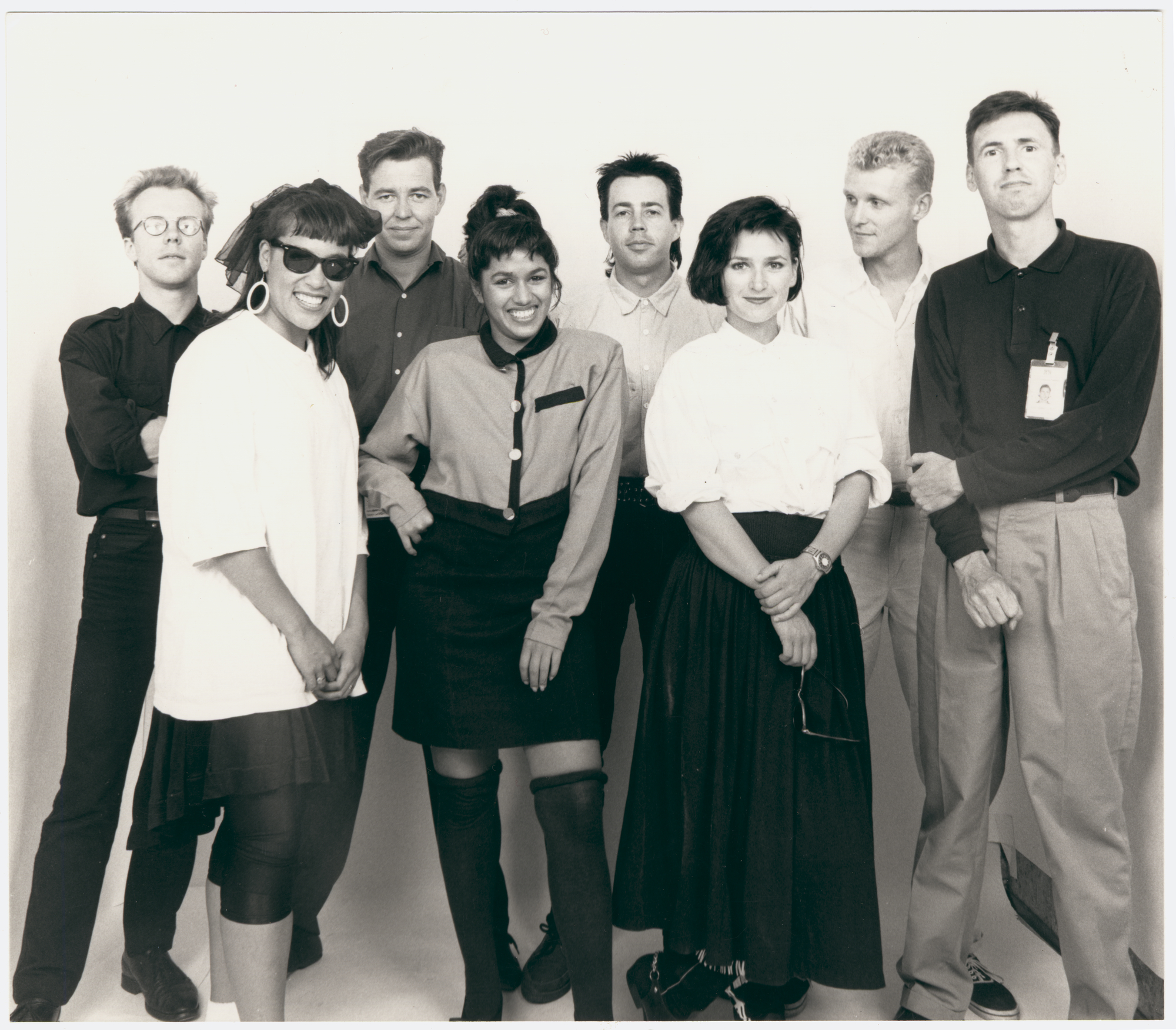 “We did come through a period where we were jostling for positions of power,” says Ceberano of the time.

“It was exciting that we were women in a field that was predominantly men and that we were doing dance where there had been no other live dance acts in the country.”

I’m Talking made Kate Ceberano a household name. Their debut single ‘Trust Me’ and subsequent releases, ‘Do You Wanna Be’ and ‘Holy Word’ all went Top 10. After just one Top 20 album Bear Witness (1986), the group disbanded a year later.

“I am so grateful for the education I got through I’m Talking. It offered me a platter to try things from.”

That platter has included everything from rock-opera with Jesus Christ Superstar, numerous blues and jazz recordings, duets with the likes of Ronan Keating and John Farnham and even children’s lullabies.

Now with some 19 studio albums under her belt, an Order of Australia, three ARIA Awards and an induction into the Songwriters Hall of Fame, it’s clear Ceberano’s journey has been spirited.

Her thirst for exploring new musical ideas, as shown on her latest album Tryst, a collaboration with long-time friend Paul Grabowsky, sees her reinterpreting classic jazz and pop songs from the past 50 years, from Bob Dylan to Divinyls.

“We did call it love songs for a while, but in fact they’re life songs.”

One of Tryst’s highlight moments is Grabowsky and Ceberano’s emotional take on Ewan MaColl’s classic ‘First Time Ever I Saw Your Face’. Ceberano agrees, “It feels like therapy every time I get to sing it.” 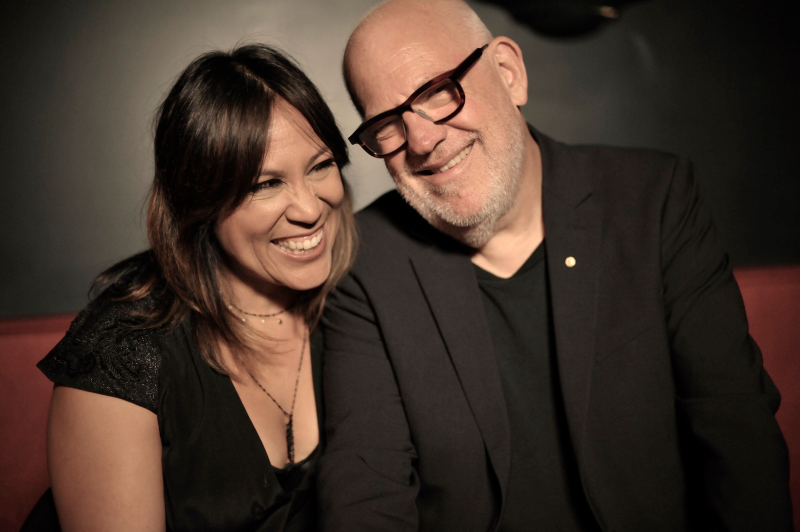 Ceberano and Grabowsky first performed together over 20 years ago at a one-off Valentine’s Day show at Melbourne’s, now closed, Continental Café. Ceberano describes it as the meeting of two very telepathic minds. “We’ve always admired each other,” she states,

“I attracted his attention at a very young age and I think that is what has bound us together over all these years. We fell in love with each other, musically speaking, when we were very young and nothing has changed. We throw all our experiences together into this pot and there’s no prejudice. Paul and I are not purists, we’re journeymen.”

When Ceberano talks of her own journey, she does so with such enthusiasm that the word ‘tireless’ springs to mind. She speaks with such animation about where she is in her life right now. “I love adjectives like ‘indefatigable’. And ‘eternally interested,’” she laughs when referring to herself.

Where does she get that optimism from?

“It must be the Polynesian in me. My nature is optimistic. I’m always the one who recovers from bad news, because I always think about where we’re headed next. I love my life right now.”

And Ceberano has every reason to love life. She’s about to head back on the road with Grabowsky to perform Tryst, including a date at Hamer Hall in September, as well as putting together arrangements for a future symphony orchestra album.

Ceberano has recently changed management too, signing with Lisa Palermo who has steered the careers of Brian Cadd and Vika and Linda Bull. “She gets a big thumbs up from my mother because she’s a wonderful woman in music and one of the few, so we champion her.”

In fact, any conversation with Ceberano also makes it clear she has a lot of positive views on the roles mentors and female role models have played in her career. Ceberano speaks fondly of her mother, Cherie, who managed the early part of her solo career in the late 1980s, “She was one of the first and only female managers in the country.”

Chrissy Amphlett is also mentioned numerous times. A teenage Ceberano used to watch the Divinyls lead singer perform side of stage and was in awe of her, taking notes for future reference. “She was like a caged animal on stage, but she was so fabulous!”

Talk quickly reverts back to her other love – fashion. “I would have definitely gone into fashion if it wasn’t for music,” she confesses.

And of her own legacy, Ceberano is emphatic that she is at peace with herself and no longer self-critical. “I’ve just hit an age where I really don’t give a shit.  I’m staring up at myself as a 17-year-old in that Bromley painting and now I think, “Wow. Look what I did!” And it’s so cool. It’s been a big life.”

Voice of an era - Tina Arena

Deborah Conway: Woman on a Mission